September 1, 2022AdminAdvocacy, Blog, Data on Africans in the US, Resources

New report reveals a large, growing and diverse community of more than 128,000 living in neighborhoods and cities across the state.

CHICAGO, IL (September 1, 2022) – As the Black immigrant and refugee community grows in Illinois, it is important to have an understanding of the basic characteristics and needs of the community. Having a profile of the community is the first step in developing responsive public and private programs and policies, and in educating the general public about their contributions.

According to the American Community Survey, 2015-2019, about 36 cities in Illinois have at least 500 African residents. The African population in Chicago is the largest at 47,277, followed by Evanston at 3,725 and Bolingbrook at 2,507. Most of the large African populations are in cities near Chicago, but many are in other parts of Illinois, such as Rock Island, Springfield and East Moline.

“The report shows that we are the most educated immigrant population and our skills are central to the state’s labor force,” added Dr. Eustace Kaijage, UAO board member and Black immigrant who has called Illinois home for more than fifty years.

Key Characteristics of the African community in Illinois:

United African Organization is a dynamic coalition of African community-based associations dedicated to social justice, civic participation, and empowerment of African immigrants and refugees in Illinois.

Standing Together for Justice & Dignity 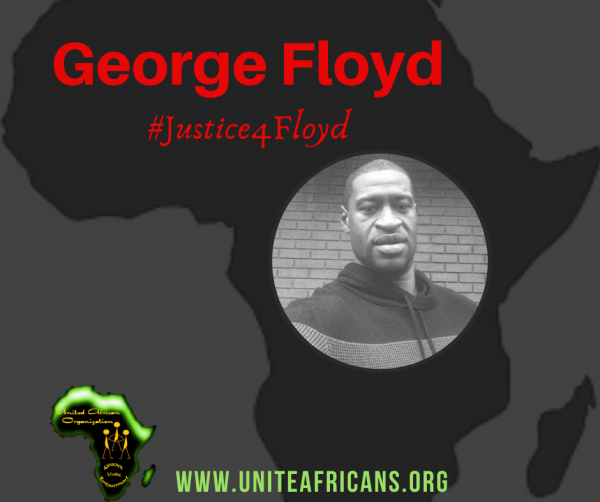 United African Organization stands in solidarity with the Floyd family as we mourn the tragic death of George Floyd. Their loss is our loss. We feel the pain and grieve with them.

As African immigrants and refugees, we live and experience discrimination everyday of our lives. We believe it is time for change. We need a world where we are not judged by the color of our skin but by the content of our character.

Amidst our pain and anguish, we remain hopeful as we see young people of all races and ethnicity stepping up and speaking out to demand dignity for Black lives.

This moment presents an opportunity for the US to make radical and transformational changes at city, county, state and federal levels that curb police brutality and dismantle systemic racism.

As we mourn, we commit ourselves to  organize and hold institutions of power accountable. And we remain resolute and relentless in the quest for justice and dignity. 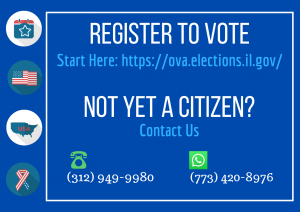 Every African Counts in 2020 Census 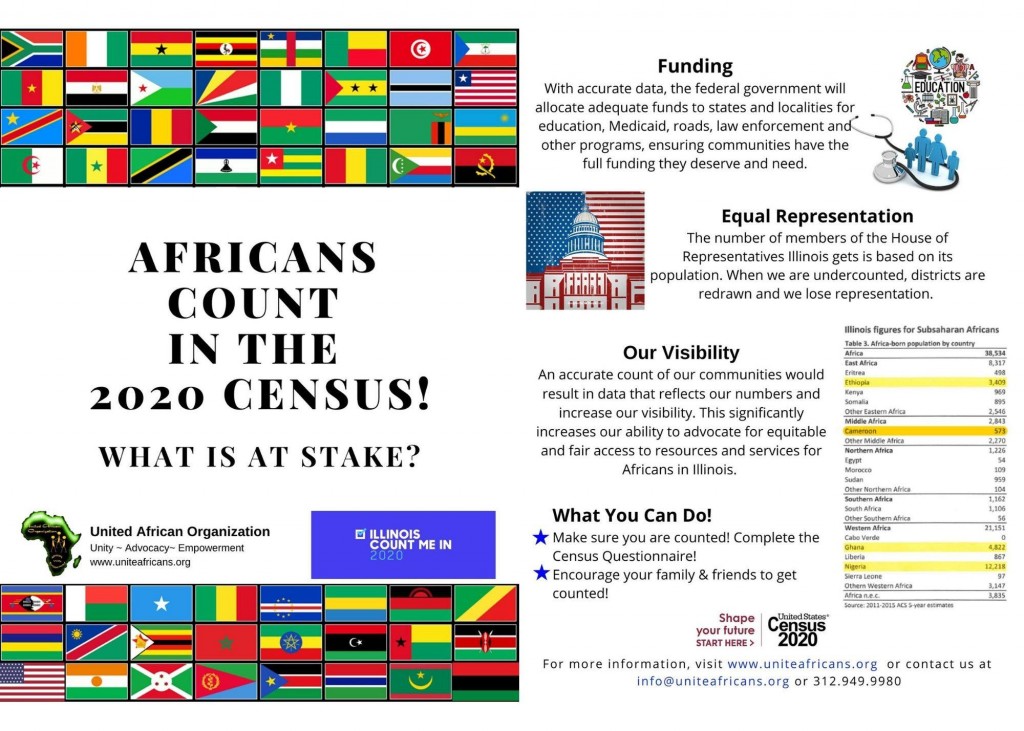 Attend Community Dialogues on the 2020 Census

On January 31, 2020, the Trump administration issued a presidential proclamation that expands the Travel Ban to nationals of 6 new countries: Nigeria, Eritrea, Sudan, Tanzania, Myanmar, Kyrgyzstan. This is effective 12:01 am EST on February 21, 2020. 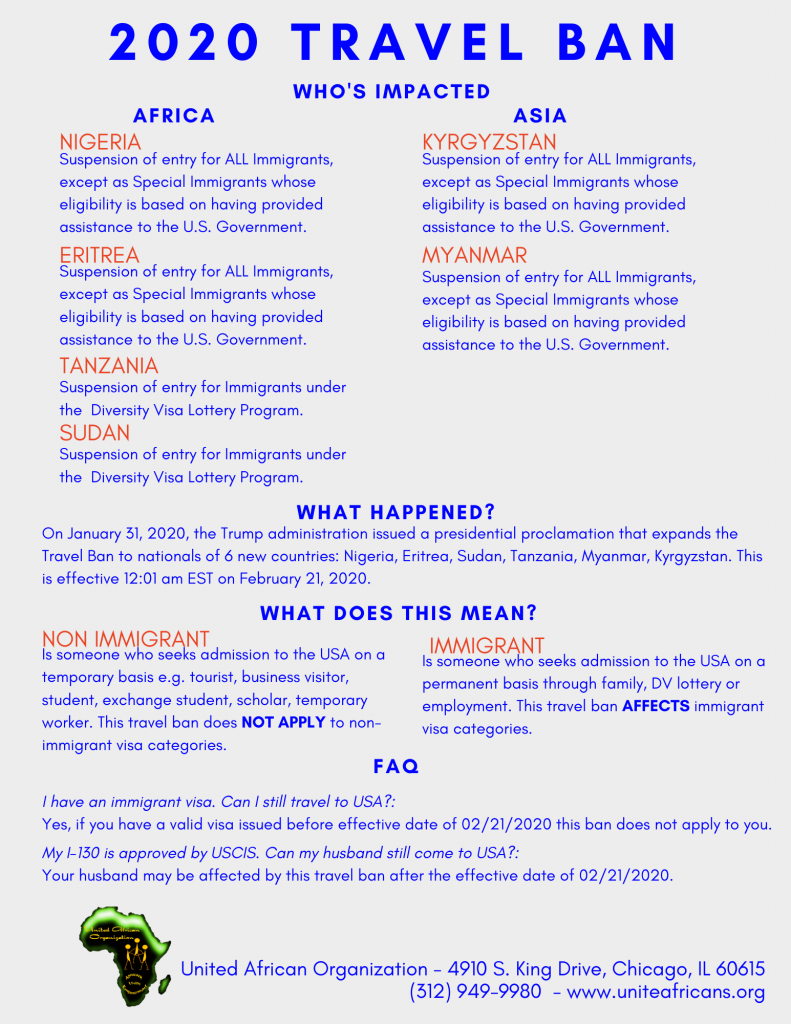 United African Organization condemns President Trump’s derogatory remarks yesterday about Black immigrants from Africa and Haiti as shocking and shameful. Once again, refugees and immigrants are faced with an attack on our basic dignity.

For the past year, we have faced executive orders banning refugees and individuals from African and Muslim countries from entering the country. Many Africans coming into the USA were detained and, in many cases, sent back. We have seen the dismantling of the U.S. refugee program, the rescinding of Deferred Action for Childhood Arrivals (DACA) and Temporary Protected Status (TPS) for hundreds of thousands Black and Brown immigrants terminated.

Nancy Asirifi-Otchere issued the following statement in response to yesterday’s offensive comments from the White House:

“Dismissing people from countries whose populations who are not white, as ‘not welcome’ is racist. Yesterday’s remarks from the White House do not represent American values and disrespects the humanity of millions of people.

We are disgusted by the president’s plan to use undocumented young people as bargaining chips to scrap current legal family-based immigration and the diversity visa program. These are some of the limited programs that allow Africans to make the US a new home.”

United African Organization stands with all marginalized communities and reaffirms the dignity of all immigrants and refugees. Additionally,

We Demand a Clean Dream Act that provides a pathway to legal status.
We Demand Protection for beneficiaries of of Temporary Protected Status
We Oppose the Family Ban
We Oppose Elimination of the Diversity Visa Program
We Oppose Separation of Families
###

DACA Recission – What You should Know

The Trump administration announced that they are ending the Deferred Action for Childhood Arrivals (DACA) program. The future of nearly a million young people are on the line. Since 2012, the DACA program has opened doors for employment, opportunities for education, and provided protection from deportation for beneficiaries. It’s up to us to act now.

Extension of DACA and Approval of DAPA by the Supreme Court

With President Obama’s executive action for the implementation of DAPA and the expanded DACA having been blocked and returned to the lower court due to a 4-4 split decision by the Supreme Court Justices, much is at stake regarding the upcoming presidential election and the future appointment of a 9th Justice. Many in the African immigrant communities will fully understand and appreciate the implications that such programs, or lack thereof, could possibly have on them and their families regarding temporary protection from deportation and newly permitted work authorization. With the recent deadlocked decision and the impending termination of the Obama Administration, there is much to be concerned about regarding the livelihoods of such immigrant families and the policies concerning deferred action that directly affect them.

END_OF_DOCUMENT_TOKEN_TO_BE_REPLACED

Statement of UAO Board President on Dr. Alie Kabba:

It is with dismay that we learn of United African Organization (UAO) Executive Director, Dr. Alie Kabba’s arrest and detention by the Sierra Leone government for the third time in under 30 days.

Dr. Kabba, on a visit to Sierra Leone, was arrested a day after he gave an interview to the local Radio Democracy 98.1 FM station, during which he criticized the ruling government for corruption and nepotism.
We, as the largest African coalition in the United States, unequivocally condemn his arrest and call for his immediate unconditional release, acquittal and return back to the U.S.
“We call on President Ernest Koroma of Sierra Leone to end the politically motivated persecution of Alie Kabba whose only crime is that he is an outspoken and fearless opposition leader with an unblemished record of fighting for democracy, rule of law, human rights and social justice”, says UAO Board Chair Godfrey Chinomona. “We demand his unconditional release and return of his seized U.S. passport.” END_OF_DOCUMENT_TOKEN_TO_BE_REPLACED
Page 1 of 212»
Donate
Now
Enhance core programs that further the mission of the UAO.