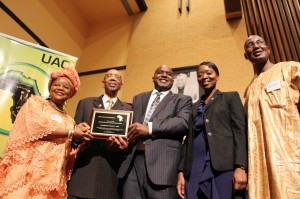 If you would like to contribute news, events, issues, interviews or music to our podcast, email us: podcasts@uniteafricans.org or call: (312) 949 9980 between 9am-5pm, Mon-Fri. To support our work through donations, click here!

We’re back with African Voices, episode 19! In this episode, we feature local Chicago news, news from the African continent, and  upcoming events. We also discuss key findings in our African Cabdrivers Health Survey and enrolling into CountyCare, and how to make Fraga Macambicana, or Chicken Mozambique.

UAO would like to thank our panelists who provided in-depth perspectives on key policies that affect the African immigrant and refugee community, our resource fair participants, Carruthers Center for Inner City Studies for allowing us to use the space, Yassa African Restaurant for lunch, and you for being there!

Kenyan demonstrators have paraded a giant papier-mache pig doused in animal blood outside parliament in protest against wage increases for newly elected politicians.

A few hundred placard-waving “Occupy Parliament” protesters smashed the pig at the gates of parliament on Tuesday, pouring animal blood over it and themselves and chanting slogans demanding MPs cut their pay.

Protesters also waved fake banknotes and placards with the slogan “MPigs”. Banners reading “I’m your employer!” and “Help the needy, not the greedy,” were held at the demonstration.

About 200 activists marched to parliament while castigating the members, locally known as MPigs, for their “greed.”

Last month Kenyan MPs voted themselves a pay rise despite orders from the national salaries commission to cut salaries, making their wages some of the highest in the world.

Politicians also defied pleas from President Uhuru Kenyatta in boosting their pay back to $10,000 a month, returning it to the rate it had been before a cut of almost 40 percent was put in place under the previous parliament.

“Kenyans are not willing to pay for the rise,” said one of the demonstration’s organisers, Florence Kanyua.

“The teachers, the police, the doctors, the nurses are poorly paid…. But the MPs don’t think about those issues.”

Dozens of police armed with batons, helmets and tear gas were deployed around the parliament in the centre of Nairobi, but the event passed peacefully.

“The economy of this country cannot afford it,” said Khelef Khalifa, chairman of the Muslims for Human Rights organisation.

Tuesday’s protest follows a demonstration last month in which live piglets were released outside parliament.

The UN is preparing to start deploying a new peacekeeping force in Mali on schedule in three weeks, even though the security situation in the north remains “complex and volatile”, the UN chief has said.

Ban Ki-moon’s statement on Monday came amid reports that a Malian government delegation and Tuareg MNLA rebels had reached an agreement “in principle” that would allow planned elections in July to go ahead in the disputed northern Kidal region, according to a senior mediator in the talks.

Negotiations in the capital of neighbouring Burkina Faso, Ouagadougou, opened on Saturday, after Mali’s army last week began advancing towards Kidal, the MNLA’s last stronghold in the remote northeast, in the first direct fighting in months.

It said the date could be delayed if security conditions deteriorate. The council is expected to make a final decision on deployment of the UN force at a meeting on June 25.

Mali fell into turmoil after a March 2012 coup created a security vacuum that allowed secular Tuareg rebels to take over half of the country’s north as a new homeland. Months later, the rebels were kicked out by fighters linked to al-Qaeda.

In the report to the Security Council, Ban said major combat operations have largely ceased, and the increasing presence of Malian, French and African troops in the north “has helped stabilise the situation and significantly hamper the movement and actions of armed groups”.

But Ban also cited reports that al-Qaeda in the Islamic Maghreb has intensified activities in Mali’s Tamesna region near the border with Niger and Algeria, while armed extremist group training camps have been found east of Timbuktu.

He said the mandate of the new UN force to use all necessary means to protect the population and prevent the return of armed elements to key populated areas “presents complex challenges”.

It does not include “peace enforcement or counter-terrorism responsibilities”, which will be handled by French forces, which could pose a problem if civilians need immediate protection, he said.

Ban said the UN’s current plans are to establish the military headquarters for the force, known as MINUSMA, in June “and progressively deploy additional units as they can be generated for operations commencing from July 1”.

South Sudan has accused Sudanese troops of crossing into its territory, as tension between the two states rises.

On Saturday, Sudan said it would block oil exports from the South after accusing it of backing rebels fighting President Omar al-Bashir’s government.

But Sudanese officials now say the ban will take effect in 60 days. Oil is vital to the economies of both states.

South Sudan became independent in 2011 after decades of conflict with Khartoum and the two neighbours still disagree on several issues.

South Sudan, which gets 98% of its revenues from oil, has massive deposits but is landlocked and reliant on Sudan’s ports for export.

The two countries have long disputed how much the South should pay to use Sudan’s pipelines.

Mr Benjamin said South Sudan would protest to the African Union (AU) and the United Nations about Sudan’s actions.

“They always violate agreements…. Sudan must be brought to book,” he told the BBC’s Newsday programme.

“They [rebels] get supplied with weapons, ammunition, petrol, spare parts for cars, food… They send their wounded to hospitals in the south. Tens of wounded [rebels] are now being treated in the South,” he said at a press conference in Khartoum, Reuters news agency reports.

However, it would reverse its decision if South Sudan stopped backing the rebels, he said, Reuters reports.

Correspondents say his comments suggest that Sudan is rowing back from a report by state media on Saturday that Mr Bashir had given an order to shut the pipeline.

The Sudanese army is fighting a rebel insurgency in at least three regions.

Sudan and the South came to the brink of war last year, prompting Juba to shut down production – badly hitting both countries.

It only resumed pumping oil in April.


ICIRR “Out of Many, One- E Pluribus Unum” Benefit and Celebration

The Museum of Broadcast Communications

Since 2002, Chicago has commemorated World Refugee Day by organizing events that honor the lives of refugees, give a voice to their stories, and raise awareness of the millions of refugees in the world who have been forced to flee their homes. These events have included workshops, conferences, lunches, street parades, downtown rallies, guest speakers, as well as diverse multi-cultural performances by members of the Chicago refugee community.

World Refugee Day Chicago 2013 will be celebrated on

Stay tuned for updates about the event – more information at facebook.com/worldrefugeeday

The challenge to leadership is growing. And it is critical for successful leaders, and organizations to be skilled in building partnerships inside and outside their organizations.Working together in partnerships and collaborative relationships are important for leveraging resources, building power, and achieving meaningful change.

As a part of our on-going Leadership Development Program, UAO will host a training on Building a Common Cause. This workshop is FREE and OPEN to the public!

“Building a Common Cause”

Are you ready to Naturalize?

An applicant for naturalization must be at least 18 years old and must establish that he or she has been lawfully admitted to the United States for permanent residence at the time of filing the naturalization application.

Applicants must have their green cards for five years, or three years in married to a U.S. citizen, in order to naturalize-though the applicant may file his or her application up to 90 days before reaching the five-year (or three) continuous residence period.

Apply for citizenship now by attending our FREE Citizenship Workshop

Taxicab drivers are exposed to a variety of occupational hazards, which includes stress, long sedentary work hours and violence that likely create health problems. Yet we know very little of the health-related needs of taxicab drivers in general and African taxicab drivers specifically. Against this backdrop, the UAO, with support from BlueCross BlueShield Foundation of Illinois, conducted a health survey among Chicago’s African taxicab drivers to assess their health needs, including insurance coverage and health services use.

Findings from the survey indicate that African taxicab drivers have significant health-related needs. Specifically, half of the respondents’ annual earnings were at or below the federal poverty level, and 66% had no health insurance. Furthermore, a third of participants had not been to a doctor in over a year; 1 in 5 respondents did not know if they had diabetes or high blood pressure; two-thirds did not know about community health centers; 71% use emergency rooms, hospitals or other safety net health providers as their usual source of care.

CountyCare is an Illinois Medicaid benefits program for adults. To be eligible, an individual must live in Cook County, be 19-64 years of age, be a legal immigrant for 5 years or more or a US citizen and have income within the program limits ($15,282 for an individual and $20, 628 for a couple). Individuals must also have a Social Security Number or have applied for one. Individuals who are already eligible for Medicaid – children, parents, pregnant women, the aged, blind and disabled – cannot enroll in CountyCare. With CountyCare enrollment individuals will receive medical care from providers in the Cook County Health & Hospital System (CCHHS) and select community providers.

For more information on our African cabdriver’s health survey and to read the executive summary, or to enroll into CountyCare visit our website or call us at: 312-949-9980

Thank you for listening to this months episode! If you have any questions on the content you have heard, or to contribute, email us at: podcast@uniteafricans.org or call 312-949-9980. As always, this podcast is made possible by listeners like you. To support our work, visit www.uniteafricans.org/support-us to make a contribution today. All donations are tax-deductible and are appreciated. Until next month!