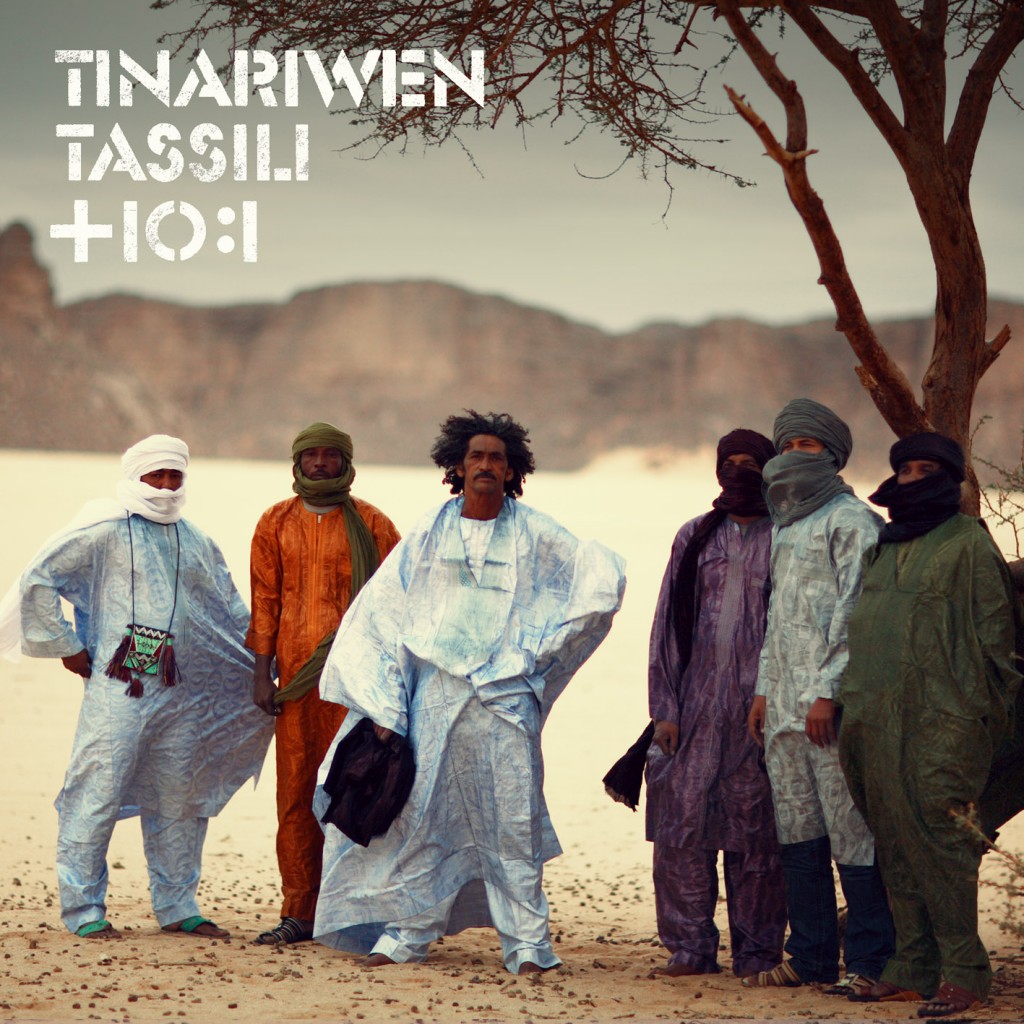 Their music has often been associated with the Tuareg rebelion. In fact, they fought during many years in the southern Sahara for the rights of the Tuareg people. But now, the Malian band, who was born in 1982 in exile, in Algeria to be more specific, has changed the machine gun into the guitar and harmonic voices. Their musical creations call for political awakening and consciousness while dealing with exile issues, repression, and political claims. They mix with verve traditional and modern tones, traditional tones which are symbolized by the drums and modern tones which are symbolized by the electric guitar. Tinariwen toured Chicago recently to celebrate the release of their new album. United African Organization’s Cheikh Diop was there to interview them in French. The translation of this interview is available below. Click ‘Continue Reading’ to read the English transcript.

Tinariwen: It’s an acoustic album and a back to basics too.  We didn’t forget our culture of course we used traditional instruments but we also use acoustic guitars. And now we like using electric guitars.

Cheikh Diop: Let’s talk about your itinerary. Your career has started in the 70s. I’ve also read that you have been an inspiration for the Tuareg rebellion . What is your feeling about this?

Tinariwen: It’s been a long time since we have switched arms for electric guitars. Because violence is not our goal. Our goal is freedom. We are Tuaregs and Tuaregs are free people. And we seek freedom for everybody in this world. From the 70s to 1991, Tinariwen was in exile then the rebellion started. During that time, listening to Tinariwen’s music was strictly forbidden. But then the government of Mali recognized the Tuareg as a people who is part of the country. That has improved the situation. We are now integrated in the system. And we are even invited to play our music during the large Malian festivals.

Cheikh Diop: How do you define your music? You’ve said that there was traditional, and acoustic instruments in your music in your new album, but I mean in general, what is the name of the music you play?

Tinariwen: Our music is “asuf” which means “nostalgia”. It’s in Tamashek language. It’s a nostalgia that I wouldn’t be able to define, it’s very deep.

Cheikh Diop: I’ve been living abroad for a long time so I know what  you are talking about. It’s a very deep feeling impossible to define.

Tinariwen: Yes it is.

Cheikh Diop: What are your musical influences?

Tinariwen: We like many types of music. In Africa there are places where people cannot listen to different kinds of music because of the lack of money and accessibility, mainly in the desert where you can hardly buy a CD. When we started to tour in the early 2000s, we met many musicians and listened to a lot of music. I love the blues for example. But before we didn’t even know the name of the type of music but just liked it. . We didn’t know the name for the blues or rock music and we have discovered that there is a link between our music and the blues.

Cheikh Diop: I have listened to your music and wow! It is so deep. I really fell in love with this music. It reminds me of the type of music played by Ali Farka Touré. I know that it not exactly the same but it’s a kind of blues, afro-jazz, Maghrebi, Arabic. There is everything in it!

Tinariwen: Thank you very much.

Cheikh Diop: What is the meaning of “Tassili” your new album ?

Tinariwen: Tassili is the name of a valley located in the south of Algeria. It’s a beautiful place, very calm and restful. It’s a mix of mountains and dunes.

Cheikh Diop: How do you manage to create this symbiosis between traditional and modern music without losing your authenticity?

Tinariwen: I think that when you play music with your heart, then you play what you are so your image has to be honest.

Tinariwen: Our band has more a culture than a nationality. What is more important today is culture. Countries and borders have no importance. As long as the world hasn’t built walls between the countries, it’s ok because people can travel and see each other. But culture is the one thing that creates sharing between all the people.

Cheikh Diop: One last question because I know that you are all very busy and tired. What is your opinion about what we call the “Arab Spring”.

Tinariwen: We are very concerned about what happened in the last couple of months in North Africa. This is happening in Africa, in the North, but it might come in other places of the continent where there is sea, mineral resources and so on. If this all happened for democracy, it’s good. We, Africans, need to grow, to take care of the situations by ourselves without others being involved. We are very concerned also because in the 70s when there was a severe drought in our country we had to live to the north of Africa and they welcomed us. And Libya has helped many African countries as well. So, if people do this for democracy, we are in at 250%. But if all this is for international economic purposes, it’s a shame. If they were only interested in Libyan oil, it’s a shame. I imagine that if France did it for oil, it will take it out from Africa knowing that African people need to develop their countries with their own resources. You may go to many parts of Africa and see miserable individuals…

Cheikh Diop: Let’s talk about your tour in the US and all over the world. How does the audience see your music and your message?

Tinariwen: We are very surprised by the greetings. We have been able to connect very rapidly with the public. We don’t cheat, we come as we are and so they see us as we are. We are very happy to have a family here now. We hope that people will come to see us in the desert – there is space for everyone.

Cheikh Diop: That is true! Thank you very much! It was nice meeting you.

Tinariwen: It was nice meeting you too.