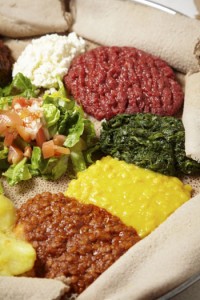 African Voices, Episode 5! In this episode:

If you would like to contribute news, events, issues, interviews or music to our podcast, email us: podcasts@uniteafricans.org or call: (312) 949 9980 between 9am-5pm, Mon-Fri.
Click the link below to see the full details of news, events and music featured on the podcast.
MUSIC
This month’s episode features recordings from Gwaii, a hip-hop/reggae artist from
Tanzania.  With his music, he hopes to spread awareness of the on-going issue of
Malaria that continues to plague Africa through his project Imani Heal Malaria Movement.  For more information, please visit:
Imani Heal Malaria Movement
ADVICE BOX
The UAO offers tips on how to eat healthily on a budget! Here, we provide 5 greats
tips to help you get started on you goal, while saving money at the same time. Tips on exercise are also offered, as well as a recipe for the Swahili dish Sukuma Wiki.
AFRICANS IN CHICAGO
Almaz Yigizaw came to the U.S. in the mid-1980s as a refugee. When she left her native Ethiopia, she was only 16. Yigizaw took a course in business offered by the Ethiopian Community Association of Chicago. Her business plan to start an Ethiopian restaurant was so successful that she was able to get it funded and start her restaurant, the Ethiopian Diamond, in Chicago’s Uptown neighborhood. Today Almaz’s restaurant business is booming.
NEWS FROM AFRICA
Senegalese troops in ‘killed in attack’:
Senegalese troops have clashed with suspected separatist fighters in the troubled Casamance region, leaving three soldiers dead and six wounded, military and hospital sources say.
The clashes took place in Sindian, 50km north of the regional capital Ziguinchor, as troops were providing security for people and their property against “armed groups who terrorise them”, a military source told the AFP news agency on Tuesday.
https://www.aljazeera.com/news/africa/2012/02/2012214134754565909.html
Uganda’s anti-gay bill back in parliament:
A bill that would make the death sentence mandatory for gays who are “repeat offenders” has been reintroduced in Uganda’s parliament.
“The anti-homosexuality bill was re-tabled on the floor of the House today and has been referred to parliament’s legal and parliamentary affairs committee for scrutiny,” Helen Kawesa, the parliamentary spokesperson, said on Tuesday.

The bill also proposes to criminalize public discussion of homosexuality and would penalize an individual who knowingly rents property to a homosexual.

Barack Obama, the US president, denounced the bill as “odious”, and Hillary Clinton, the secretary of state, called on Ugandan President Yoweri Museveni to reject it and some international donors threatened to cut aid if it became law.
https://www.aljazeera.com/news/africa/2012/02/20122723712742575.html

UN says Somalia famine is over:
An exceptional harvest, good rains and food deliveries by numerous aid agencies have helped end famine in Somalia but food stocks could run out again in May, the United Nations has said.
The famine, which was declared in July 2011, killed tens of thousands in south and central Somalia. Almost ⅓ of Somalia’s population are still in need of food, clean water, shelter, and other assistance.
https://www.aljazeera.com/news/africa/2012/02/201223192738943967.html

AU extends mandate of top executive official:
The African Union has extended the mandate of its top official Jean Ping after an election, in which he was challenged by South Africa’s Nkosazana Dlamini-Zuma, deadlocked.
https://www.aljazeera.com/news/africa/2012/01/201213123640509107.html

Mandela’s Image to appear on South African money:
South Africa will replace its current banknotes with a new series bearing the image of Nelson Mandela, the country’s iconic freedom fighter and first black president.
“It is a befitting tribute to a man who became a symbol of his country’s struggle for freedom, human rights and democracy,” South Africa’s president Jacob Zuma said Saturday as he unveiled the new notes.

https://ournewsnow.com/international/2050/Mandela%27s-Image-to-Appear-on-South-African-Money
Sports
Tears welled up in Kalusha Bwalya’s eyes Sunday (February 12th)  as he held up the African Cup of Nations trophy after Zambia’s championship victory over the Ivory Coast on penalty kicks.
https://www.nj.com/soccer-news/index.ssf/2012/02/on_soccer_zambia_travels_emoti.html
AFRICA NEWS FROM THE COMMUNITY
One Africa Campaign The U.S. State Department defines North Africaunder its Bureau of Near East Affairs even though it’s apart of Africa. Help us tell the U.S. government that North Africa is apart of Africa by signing our petition (located at uniteafricans.org), and by calling the DOS at 202-647-4000
UAO gives strong showing at ICIRR Annual Summit Earlier this month, the Illinois Coalition for Immigrant and Refugee Rights (ICIRR) hosted its 2nd annual Immigrant Integration Summit – “One Nation, One Dream”. The Summit included workshops for community leaders and advocates, citizenship clinics, a youth civic leadership academy meeting and a resource fair. United African Organization had a strong presence at the Summit.
More than 1,500 people attended the summit, joined by 50 of Illinois’s most powerful elected officials and dignitaries, including Governor Pat Quinn, US Senator Dick Durbin,

UAO’s Alie Kabba chosen among top 100 African American leaders in US by MNBC’s The Grio: Alie Kabba is the executive director of the United African Organization, a Chicago-based group comprised of multiple African national associations dedicated to empowering African immigrants and refugees in Illinois. After being awarded, Kabba continues to be an active presence in developing an engaged U.S. constituency for Africa and strengthening African