You can talk to someone for free about  your healthcare coverage options under the Affordable Care Act, aka, ObamaCare. UAO’s specially trained counselors will talk to you face-to-face or over the phone, and help you find and apply for the right coverage for you and your family.

Be sure to call ahead at 312-949-9980 to make sure we will be available to help you. Alternatively, complete the contact form below and someone will contact you within 24 hours. END_OF_DOCUMENT_TOKEN_TO_BE_REPLACED

Get Ready n Get Covered!

The new healthcare law, called the Affordable Care Act or ObamaCare, may impact you and your family! Under this law, there will be a new way to buy health insurance, in the health insurance marketplace.

You can begin to apply to get health insurance on OCTOBER 1, 2013.

In the meantime, here are a few things you NEED to do:

There is good news for spouses and children (unmarried and under the age of 21) of lawful permanent residents, aka F2A category, this month! Starting August 1, 2013 through at least August 31, 2013, the F2A category has a current priority date for nationals all over the world.

This means that all foreign nationals who are the spouse or child (unmarried and under the age of 21) of a green card holder may apply for lawful permanent resident status immediately.

Click here for more information on petitioning for a family member.

How does CIR affect Black Immigrants?

The African Ministry of Trinity United Church of Christ will be hosting a panel discussion this Sunday to discuss how comprehensive immigration reform impacts Black immigrants.

Will you have your voice heard? 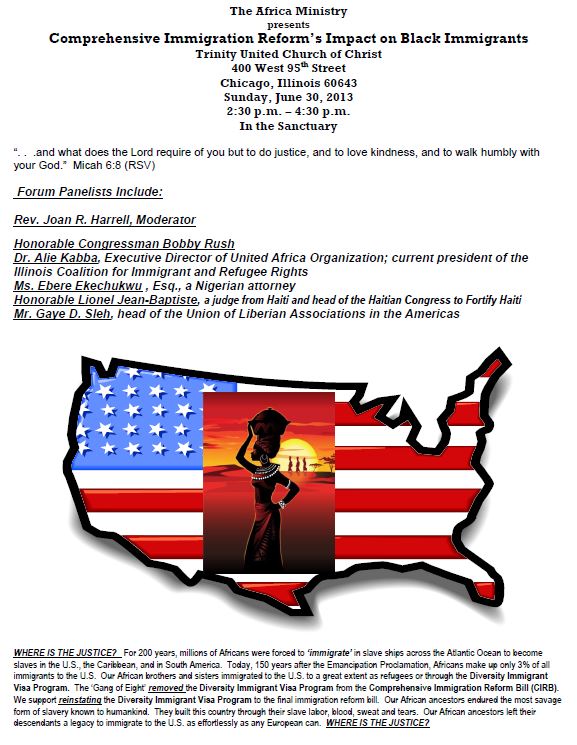 African Voices is back with episode 19!

African Voices Podcast offers the African community in Illinois the opportunity to have their voices heard. In addition to upcoming events and local and global news relevant to the African community, we feature key findings from our African Cabdriver Health Survey and advice on accessing healthcare.

If you would like to contribute news stories, events, issues, interviews or music to our podcast, email us at: podcast@uniteafricans.org or call 312-949-9980.

Support our work by making a donation today!

June 3rd marked the 125th anniversary of Martyrs Day in commemoration of the 22 Uganda Catholic Martyrs who were murdered in 1886. In Uganda, the day was a culmination of several days of trekking, sacrifice, prayer and meditation by pilgrims to the Catholic shrine that was built at the spot where St. Charles Kalooli Lwanga was burnt. In Chicago, the Ugandan community is marking this day with a special event on June 8th at St Hubert Catholic Church, 729 Grand Canyon Street, Hoffman Estates, IL 60169.

The Uganda Martyrs were Christian converts who were murdered for their faith in the historical kingdom of Buganda, now part of Uganda. The main reasons for their murder were refusal to offer sacrifices to the traditional gods and objection to and resistance to King Mwanga’s homosexual practices. Their killings seem to have been tied to specific resistance to Mwanga’s attempts to engage in homosexual practices with those killed immediately before the killings.

Saint Charles (Carl) Lwanga and his companions, Martyrs of Uganda, were a group of Christians (both Roman Catholics and Anglicans) who were murdered by Mwanga II, the Kabaka (King) of Buganda, between 1885 and 1887. These deaths were part of a three-way religious struggle for political control of the Buganda royal court. In 1877, the Church Missionary Society in London had sent Protestant missionaries to the court, followed two years later by the French Catholic White Fathers. These two competed with each other and the Zanzibar-based Muslim traders for converts and influence. By the mid-1880s, many members of the Buganda court had converted and become proxies for the religious and nationalist conflict being played out in the court. Kabaka Mwanga II, upon his ascent to the throne, attempted to destroy the foreign influences he felt threatened the Buganda state, but was instead deposed by armed converts in 1888.

Anglican James Hannington, the Protomartyr, had been dispatched to be the bishop of Eastern Equatorial Africa, but he was executed with his companions before they could enter Buganda.

Twenty-two of the martyrs were Roman Catholics and were canonized by Pope Paul VI on October 18, 1964. Although the Anglicans were not canonized in the Roman Catholic Church, the Pope did mention them.Their feast day is June 3. They were:

The Ugandan Martyrs were featured in the film Millions. (www.wikipedia.org)

City of Chicago signs Resolution in support of Diversity Visas

The Chicago City Council adopted a resolution on Wednesday, May 8, 2013 in support of UAO’s advocacy to include Diversity Visa Program in the proposed comprehensive immigration reform bill. The diversity visa program is one of the few options available for Africans to come to the US as immigrants. Eliminating the program will have a negative impact on the future flow of black immigration.

In this historic moment, we would like to thank Alderman Will Burns (4th ward) for his tireless effort to have this resolution adopted in the City of Chicago.

At the Summit, attendees had the opportunity to reflect on critical issues that affect the African community. Panel discussions on comprehensive immigration reform, accessing healthcare through the Affordable Care Act, and organizing African immigrants and refugees on the local and national level informed the community on how these policies affect them and the importance of advocacy work to fight African issues.

Congressman Bobby Rush (D-IL-1) gave the keynote speech, further motivating the crowd to be advocates for change in regards to African issues.

We would like to thank all of our panelists for providing thought-provoking information and stimulating conversation throughout the day, as well as all of our interns and volunteers for making this event a success.

A special thanks to the organizations that participated in the Resource Fair providing health, immigration, legal, and employment services to the community.

Want more information on our annual Summit and Resource Fair? Contact us today at 312-949-9980