It was the security man downstairs saying there was a delivery.

It was this delightful tray of fresh baked pastries and bite-size cookies from www.bakeforme.com .

who is our secret admirer?

Thank you for making our day! 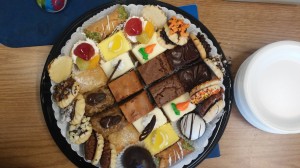 Walking into UAO that first day and meeting everybody, I knew this internship was going to make this summer my best so far. Everyone was so nice and I felt really relaxed from the beginning which normally doesn’t happen much because I would usually take like a week or two to feel relaxed at a new place not to mention a new place in a different country.

Being my first internship, I wasn’t so sure what to do and how to go about doing some of the stuff but it was no bother because everyone made it all seem so easy and walked me through whatever I needed to do. I learned a lot of things ranging from data entry down to U.S. immigration law and it was wonderful. END_OF_DOCUMENT_TOKEN_TO_BE_REPLACED 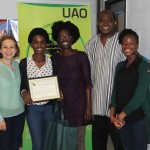 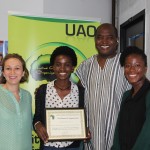 If you are a DACA recipient who received a three-year Employment Authorization Document (EAD) after February 16, 2015, it was likely mistakenly issued and must be returned.

Approximately 2,100 DACA recipients were issued three-year Employment Authorization Documents, rather than two-year EADs, afterthe  February 16, 2015, court injunction was in place. USCIS has taken action to correct this issue for these individuals and has updated their records to reflect a two-year period of deferred action and employment authorization. USCIS has re-issued and mailed the corrected two-year EADs to these individuals. USCIS has also notified these individuals that the three-year EADs are no longer valid and must be immediately returned, along with any related approval notices. USCIS is carefully tracking the number of returns of these invalid EADs and continues to take steps to collect the remaining cards. END_OF_DOCUMENT_TOKEN_TO_BE_REPLACED 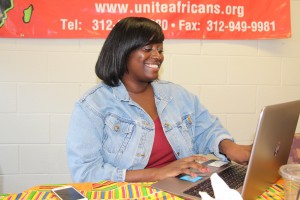 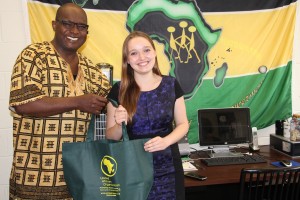 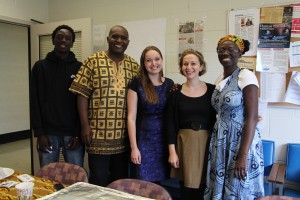 I am Misturat Ganiyu. Disregard my age, occupation, gender, race, and other details that define a person. Concentrate, instead, on the beginning sentence in this blog. This is where people trip and stumble. At a young age, I realize the difficulty of my name. During that time, I would recite it to other elementary school kids and confusion followed. My name is pronounced as incorrectly as a first grader who utters a challenging word for the first time. A child may split the word into syllables or skip the word altogether, but it will return. The same concept applies to strangers meeting other strangers at a commonplace. Names are introduced and they part ways, but encounters happen.

Repeating a name accurately exemplifies kindness. If you say it wrong and apologize for it, that is alright as long as you try again. Practice helps. Don’t ask for a shortcut such as the person’s nickname. Sometimes, one is absent.  END_OF_DOCUMENT_TOKEN_TO_BE_REPLACED

We are proud to announce that United African Organization successfully hosted its ninth Annual Chicago African Summit & Community Resource Fair on May 30th 2015 at 10 West 35th Street. Despite the rainy weather, lively African immigrants and Chicago natives attended the event, which featured a Resource Fair where information about a variety of services and social programs was made available. Among the many resource fair participants there was the Illinois Eye institute, who performed on-the-spot screenings and vision tests, the Illinois Department of Human Rights, Metropolitan Family Services, Blue Cross Blue Shield of Chicago, and Urban Partnership Bank.