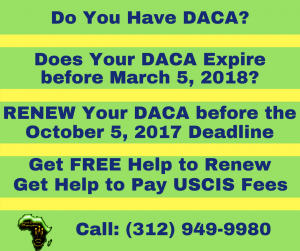 The USCIS fee for a DACA Renewal Application is $495. For many, affording this fee is such a short time can be stressful and prevent them from renewing their applications. A number of organizations are offering scholarships to help DACA recipients who need to renew their applications before the October 25 deadline.

If you currently have DACA and your DACA benefits would expire before March 5, 2018, then you should submit an application to renew your DACA before October 5, 2017.

Protection for All Movement: To Apply, Email protectionforall@gmail.com

The Mexican Consulate in Chicago is offering assistance from $300. To Apply, visit the Consulate, 204 S. Ashland Ave., or call its Protection Department at (312) 738-2023 during regular office hours by October 5th.

Undocumedia: To apply for a $495 scholarship, fill out this form.

UnDocuBlack Network: To Apply, email Patrice@undocublack.org OR out this form.

Get Free Help Renewing Your DACA

DACA Recission – What You should Know

The Trump administration announced that they are ending the Deferred Action for Childhood Arrivals (DACA) program. The future of nearly a million young people are on the line. Since 2012, the DACA program has opened doors for employment, opportunities for education, and provided protection from deportation for beneficiaries. It’s up to us to act now.

USCIS has published the final rule on their services fee schedule, the notice is available at: https://www.federalregister.gov/d/2016-25328.  This rule is effective December 23, 2016. Applications or petitions mailed, postmarked, or otherwise filed on or after December 23, 2016 must include the new fee.

The new rule establishes a three-level fee for Application for Naturalization, Form N–400.

Below, please find a copy of the table of changes for common applications:

If you are a DACA recipient who received a three-year Employment Authorization Document (EAD) after February 16, 2015, it was likely mistakenly issued and must be returned.

Approximately 2,100 DACA recipients were issued three-year Employment Authorization Documents, rather than two-year EADs, afterthe  February 16, 2015, court injunction was in place. USCIS has taken action to correct this issue for these individuals and has updated their records to reflect a two-year period of deferred action and employment authorization. USCIS has re-issued and mailed the corrected two-year EADs to these individuals. USCIS has also notified these individuals that the three-year EADs are no longer valid and must be immediately returned, along with any related approval notices. USCIS is carefully tracking the number of returns of these invalid EADs and continues to take steps to collect the remaining cards. END_OF_DOCUMENT_TOKEN_TO_BE_REPLACED

TPS Registration Deadline for Liberia, Guinea, and Sierra Leone is May 20, 2015

Wednesday, May 20, 2015, is the deadline for eligible nationals of Liberia, Guinea, and Sierra Leone (and people without nationality who last habitually resided in one of those three countries) to register for Temporary Protected Status (TPS). The TPS designation runs from Nov. 21, 2014, through May 21, 2016.

To be eligible for TPS, you must demonstrate that you meet all eligibility criteria, including that you have been “continuously residing” in the United States since Nov. 20, 2014, and “continuously physically present in” the United States since Nov. 21, 2014. You must also undergo thorough security checks. Individuals with certain criminal records or who pose a threat to national security are not eligible for TPS. END_OF_DOCUMENT_TOKEN_TO_BE_REPLACED

Are You from Liberia, Guinea or Sierra Leone?

END_OF_DOCUMENT_TOKEN_TO_BE_REPLACED

On November 20, 2014, the President announced a series of executive actions to crack down on illegal immigration at the border, prioritize deporting felons not families, and require certain undocumented immigrants to pass a criminal background check and pay taxes in order to temporarily stay in the U.S. without fear of deportation.

Important notice: These initiatives have not yet been implemented, and USCIS is not accepting any requests or applications at this time. Beware of anyone who offers to help you submit an application or a request for any of these actions before they are available. You could become a victim of an immigration scam. Subscribe to this page to get updates when new information is posted.